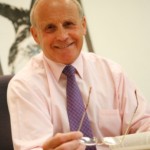 Sir Tim Wilson served as Vice-Chancellor of the University of Hertfordshire from 2003 to 2010 and as its Deputy Vice Chancellor for the previous twelve years. Her Majesty The Queen conferred a Knighthood on him in the New Years Honours list 2011, for Services to Higher Education and to Business. He became a Deputy Lieutenant of the County of Hertfordshire in January 2011.

Tim is acknowledged as being one of the leading thinkers in university/business collaboration, having recently published a fundamental review of Business/University collaboration on behalf of the Government. He has served on several national working parties in the field of knowledge transfer, intellectual property and business/university collaboration and is an adviser to the UK government on Enterprise and Entrepreneurship in universities. He is a strong advocate of differentiation amongst universities and the centrality of universities in economic and societal development and is a regular speaker at both national and international conferences on the role of higher education in economic development.

Sir Tim secured his first degree in Mathematics and Computer Science at the University of Reading, followed by a Master of Arts Degree in Operational Research from the University of Lancaster and a PhD in Education Management from Walden University in the USA. He spent his early career in manufacturing as an analyst working on large-scale simulation models, before pursuing an academic career with institutions that are now the Leeds Metropolitan, Cranfield and de Montfort universities, becoming a Professor of Higher Education Management in 2001.

Amongst his recent national roles have been: 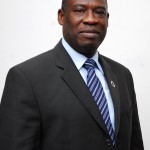 Peter Bamkole pioneered the Enterprise Development Centre (EDC) of the Pan-African University in Jan 2003, a model which has been replicated in four African countries (Ghana, Kenya, Tanzania & Rwanda). As the Director of the Center, he is responsible for the overall program development, capacity building and support services to entrepreneurs. Trained as a Mechanical Engineer in the UK, with MBA from IESE Business School in Spain, his over 28yrs cognate experience spans both the public and private sectors. (Oil Industry; Water Supply and Education).

He currently leads the Goldman Sachs 10,000 women initiative in Nigeria, Diamond Bank’s Building Entrepreneurs Today (BET) and a number of other partnerships in Nigeria, including the Federal Government of Nigeria’s Grooming Enterprise Leaders and National Business Planning competition – YouWIN. With the support of The Coca Cola Africa Foundation, he has developed a new generation of NGO leaders in Nigeria. A certified Business Edge trainer for IFC (the private arm of the World Bank) and UNCTAD ‘expert’ on entrepreneurship education, Peter consults widely in Sub-Saharan Africa on entrepreneurship development and practice. He is a member of the University Management Council and serves on the Youth Learning Advisory Committee of the MasterCard Foundation. 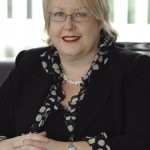 Professor Wendy Purcell is Vice-Chancellor and Chief Executive of Plymouth University. Professor Purcell was appointed in December 2007, and since then has firmly established the University’s vision to be the Enterprise University. Through Wendy’s leadership the University has placed enterprise and entrepreneurship firmly at the heart of the institution’s mission, and she is a regular speaker in this area.

Professor Purcell has regularly acted as an adviser to the Government in the fields of postgraduate and medical education, and is a member of the Universities UK Sustainable Development Group and Long-term Strategy Group. She is also a member of the CBI South West Council, the Heart of the South West Local Enterprise Partnership Board, the Plymouth Local Strategic Partnership Board and the Plymouth Employment & Skills Board. She is a trustee of the National Marine Aquarium, the Drake Foundation and The Lord Caradon Lectures Trust.

Wendy was previously Deputy Vice-Chancellor at the University of Hertfordshire, and prior to this she was Dean of Applied Sciences and Pro Vice-Chancellor (Research) at the University of the West of England, Bristol. Wendy is Professor of Biomedicine and holds a degree in Biological Sciences and a PhD in Immunopharmacology. Professor Purcell has an international reputation in this field and has attracted millions in research grants, published widely and had a number of patents filed on her work. 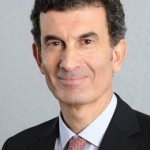 Michael Mercieca was appointed Chief Executive of Young Enterprise in April 2012. He was previously Director of Finance & Operations at The Prince’s Trust which he joined in 2003. As a member of the Senior Management Team he was responsible for Finance, Corporate Support Services, Programme Design and Management of Scotland, Wales and Northern Ireland. Over the years, leading a team of 220 staff, Michael helped improve the governance, financial and programme management of The Trust, helping to build the charity’s reserves and steadily increasing the number of young people supported each year. Michael began his career in manufacturing at GKN and Racal Electronics and then switched to the media sector as financial controller for BBC Enterprises. He rose to become Financial Director of BBC World Service TV and UK Cable and Satellite TV, launching BBC News around the world and UK Channels such as UK Gold and UK Living. After that he was Interactive Service Director at BSkyB and Finance Director at the film and TV production company Mentorn Barraclough Carey. Through his own firm, Media Gap, he has advised companies such as Yellow Pages, NTL, Telewest, and The Co-operative Bank. He qualified as a chartered management accountant in 1980. 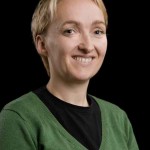 Rebecca Allinson is a Senior Consultant with Technopolis Group, a European Science Innovation Policy Consultancy. Working out of the UK practice she has been working on issues of research, innovation and higher education policy in the European market for over 15 years – with the European Commission and the OECD as major clients. This includes major studies and evaluations on the Modernisation of European Higher Education (curriculum, funding and governance) and the support of the high level working group on the European Higher Education modernisation agenda. She also recently completed the first study on best practice for the new European Institute of Innovation and Technology (EIT) and its knowledge and innovation communities (KICs).

Rebecca’s expertise lies in the area of European University Business collaboration and the interplay of the so-called knowledge triangle – the flow between research, education and innovation. She supports the European University Business Forum with think pieces and case studies. One major study arising from the University Business Forum – is a “guiding framework” for European Higher Education Institutions who are interested in becoming more entrepreneurial. Technopolis, in cooperation with a group of European experts and the OECD has been devising this guiding framework, which covers the main factors likely to be characteristic of entrepreneurial universities across Europe.

As part of the IEEC 2012 a panel convened of some of the key figures in enterprise from those organisations whose work parallels our own to discuss the mutual opportunities available to us.

Representatives from AGCAS, ISBE, NACUE, PraxisUnico, and UKBI participated in the panel event on the 13th September.

AGCAS (Association of Graduate Careers Advisory Services) is the professional association for HE careers practitioners.

ISBE (Institute for Small Business and Entrepreneurship) is a network for people and organisations involved in small business and entrepreneurship research, policy, education, support and advice.

NACUE (National Association of University and College Entrepreneurs) is a charity supporting and representing student-led enterprise societies and young entrepreneurs in universities and colleges across the UK.

PraxisUnico is an educational not-for-profit organisation supporting innovation and commercialisation of public sector and charity research for social and economic impact. Dr Douglas Robertson is Chair of PraxisUnico and Director of Research and Enterprise Services at Newcastle University.

UKBI (UK Business Incubation) is a membership organisation for enterprise professionals and the independent voice of business incubation and accelerated growth in the UK. Peter Harman is the Chief Executive of UKBI. 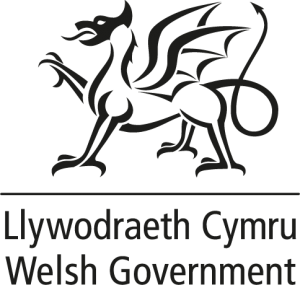